It's that time of year again - to put together the Christmas boxes for Operation Christmas Child.
It occurs to me that I must come across as rather self righteous on this page. I do have fun you know!
I do know I have great fun putting together my Christmas child box. Also helping at the fund raising coffee morning where no doubt I will eat a lot of cake, buy too much home made lemon curd and get silly goodies for my box.Like these glove (literally) puppets 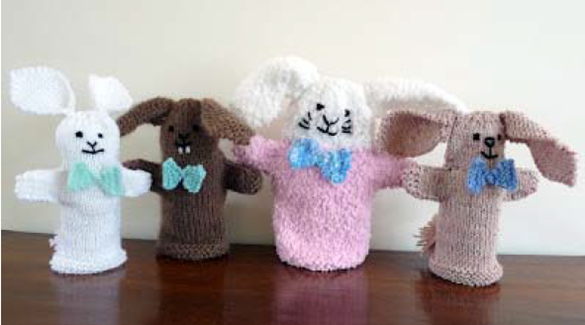 Food for thought. 1 million people worldwide will die by their own hand this year

That's a bit of a downer, however on 10th October you can hold a 'Tea and Talk' event to raise money for mental health work in the UK.

Just go to the Mental Health Foundation website and click on fundraising. I guess if you are not in the UK you could still do it, only for a local charity as all the resources are downloadable.

I am also happy to write a fic for a donation to the Mental Health Foundation. The only thing is I don't have a clue how to post one on Live Journal, so you would either have to help me do that or I can post it to FF.net.

But what an excellent reason to eat cake! and of course you can serve coffee instead of tea! Or you can just eat cake, because it is important to mental health generally. (Especially chocolate cake or cinnamon rolls.)
Thanks for reading this far.
Fi

Do people actually listen to themselves?
I acknowledge that our team is overworked and underpaid. However if people are in crisis they need to be seen, and we do make our management aware of the situation (and all four teams across the county have the same problem.). I asked  a member of staff what her caseload is like (she is very limited by ill health with the number of people she can take). Instead of just saying she was full she told me to go ahead and give it to her, I said I wouldn't do that as she had a full caseload. I was then subjected to a five minute lecture about how she would let her caseload go up to 40, then tell occupational health, then go off sick. She then accused me, as management of killing members of the team.  I don't mind people telling me they are stressed, I don't mind if people just say to me that they cannot do something (I really don't - and they often do!) I do object to being accused of deliberately trying to kill people! Apparently when she was in management she never asked her team members to do anything that might stress them at all.
This was just one of the 'orrible things that happened today. The other was a member of staff who apparently didn't ask if the carer of a man with severe alzheimers was stressed, with the consequence that she has had a major breakdown and I had to spend the whole afternoon being ranted at by her daughter, her GP and family. he didn't even offer to help out when we were trying to sort out the mess, because she was a separate referral from her husband and therefore nothing to do with him!!!!!!!
I feel like I have worked a week and it is only Tuesday.

badly_knitted at If you only do one thing today...
Originally posted by

jedi_harkness at If you only do one thing today...
Originally posted by

ladyhadhafang at If you only do one thing today...
Originally posted by

girlofavalon at If you only do one thing today...
Originally posted by

cassie_black12 at If you only do one thing today...

I know I'm preaching to the choir with you guys when it comes to LGBT equality, but believing something is fair and actually getting off your bum and doing something about it doesn't always follow like it should. So here's a little (and slightly preachy) reminder!!

1/ Go here and sign the C4EM's petition for marriage equality. This is the simplest and probably most visible way to show your support. It currently has 60,000 signatures -- the petition against (by C4M) has over 500,000!!!

2/ Go here and fill out the government's consultation. It might take a little bit longer, but you can bet that for every pro-person who doesn't find the time, there will be dozens of 'anti' people who will.

3/ Email your MP. There's a handy template there for you to use so you don't even have to think of what to say. Also, you can go here to see where your MP stands on the issue. A hugely important thing to do because the majority of MPs will be voting with their conscience rather than following the party line, so make sure you let yours know your feelings.

4/ Okay, so I lied. There's actually a fourth thing. And that is simply spread the word. The consultation ends in two day - it's our last chance to get as many people mobilised as possible. So tweet it, Facebook, blog it, beat your friends and family around the head with it until they give in!!! And if you want to repost to your own journal (and please feel free to edit), here's an ever-so helpful button

I work in a mental health team for older adults. Sometimes the humour gets a little dark, If you like it dark as Ianto's coffee and twice as twisted you might appreciate this one.

A colleague was reading the clerking in notes for her patient who had been sectioned. (committed). Under relationships it read - 'Family remain dead'

Later a colleague described an ex patient as being 'well dead'

We are left wondering if in fact South Buckinghamshire actually has a problem with the undead, and it's only just becoming apparent.....

So after years of prevarication and pure laziness I decided to try posting my fan fic to my live journal. So here goes.....

Title: YAT
Author:Musingwoman2
Rating(s):12 UK rating
Pairing(s): Jack/Ianto
Warning(s): None
Summary Something is terrorising an English beauty spot. Our intrepid team cross the border to investigate.
Romance,angst and murder involves the whole team, with an extra side of Jack post TYTNW.

Given the amount of chocolate that I consume in a year I feel it is something that I can make a difference to peoples lives with, so a while ago I started supporting Stop the Traffic ,who campaign to stop the use of child labour in cocoa growing, as well as working with people trafficked to the UK, Ireland and the US.

Two of their guys are currently running 5 marathons in five days, to raise funds for their work. I am shamelessly promoting this here to raise awareness. So perhaps even if you don't want to sponsor them, you might want to visit   Stop the Traffic.org see what they do.

And of course, please buy Fairtrade Chocolate! Please also pass this along to anyone who might be interested.

They also have a campaign aimed at educating women in developing countries, as we know , education = choice, and women who are educated are less likely to be trafficked or pressed into the sex industry.

Attempted to post a couple of days ago and obviously did not hit the right button... so here goes again.

Aloha!
This is our first time on Big Island in Hawaii, last year we were lucky enough to go to Maui, but a dormant volcano wasn't good enough for us! No we want to see a live one! So off to Big Island.
24 hours to get here on United. I like United - the staff are all around my age, and all shapes and sizes and even economy is comfortable.
As is usual for our family we had a trauma with the hire car - not only wasn't it the correct car for what we paid, it shuddered as it drove, so back to the company who couldn't get their head around giving us back the extra money. There is always a discrepancy between what the website we use says is a premium car and what the local office thinks is a premium car. I mean every time!

Big Island landscape is incredible. So different to Maui. Bleaker. At first I thought we were driving through a building site, then realised it was basically lava. A truly primitive landscape punctuated with American resorts and architecture. You look across this brown flat land to the bluest sea ever. So many contrasts. The resorts are all irrigated grass and exotic plants surrounded by this alien desert.

There is amazing graffiti too. All along the highway people write their names in white rock on the lava. Sometimes there are hearts with initials, and sometimes there are memorials, but all done in this local rock.
Maholo for reading
Collapse